Orion "Hunt" Athalar is an infamous fallen angel who works for the Archangels as a personal assassin.

Hunt, birth name Orion, was born into a poor family, in Shahar's territory in the southeast of Pangera. His mother worked very hard to look after him but never told him who his father was. When he was old enough, he joined the army in order to support himself and his mother. Hunt would send money back to his mother, which she would store away. After hearing of this, a group of people broke into his mother's home, killing her to steal the money Hunt had sent.

This led him to become a general in the uprising that sought to overthrow the Imperial Senate. Shahar was the leader of the uprising as well as Hunt's lover. When the uprising failed, Shahar was killed, and Hunt became a slave along with everyone else who was part of the uprising. For the first seven years, he was tortured until the Archangel Ramuel became his master. Ramuel continued the pattern for two more years until he got bored with it, and realized that Hunt would be more useful dispatching demons and doing his bidding than rotting away in torture chambers. Over a course of 200 years, Hunt spent his time being a slave passed around by the leaders of the world until he ended up in the Crescent City, and became a slave to Micah Domitus.

Micah offered Hunt a bargain: as Hunt had led the 18th Legion on Mount Hermon, he was responsible for all 2,217 deaths that he and the rebels he led took. This meant that Hunt must kill 2,217 people of Micah's choice, as Micah's personal assassin, in order to one day gain his freedom.

Hunt is a committed and focused male whose current mindset has been forged from the hardships and conflicts throughout his entire life. He is both highly lethal and observing with a rather imposing demeanor that causes others to feign back as a result of his reputation as "the Umbra Mortis". However, in truth, Hunt is incredibly self-loathing. Not only is his self-hatred attributed to the torture he endured at the hands of many Archangels for the failed rebellion against the Asteri, but also his status as a slave made to be a weapon for those who owned him at the time.

As a result of this, Hunt rarely makes appearances in social gatherings and rarely shows his snarky and dry-humored side unless it's with people he truly knows. However, Hunt is far more caring than what the public perceives of him. He is shown to be understanding, and protective. He isn't afraid to speak his mind when it comes to the well-being of those he cares about. His more snarky and dry-humored behavior is more prominent when around individuals he's comfortable with such as his friends in the 33rd Legion and Bryce.

Hunt has light brown skin, shoulder-length dark hair and dark brown angular eyes. His angel wings are grey. Hunt has a thorn halo on his forehead which originally controlled his power after he was enslaved. Even though it was temporarily removed, Rigelus branded him again. He used to have a slave's mark on his wrist, but it is now stamped with a “C” over the mark, indicating that Hunt is no longer a slave.

After the events of House of Earth and Blood, Hunt's appearance slightly changed, with him having cut his hair to at least the back of his neck. However, when he was captured by the Asteri in his and Bryce's attempt to infiltrate the Eternal City, he has returned to baring the halo over his head as a result of Rigelus branding him once again as punishment for his defiance.

During Bryce's investigation into Danika's death on behalf of Micah Domitus, Hunt grew close to Bryce and began a relationship with her. They have a classic enemies-to-lovers relationship: at first, they only tolerated each other due to direct orders from the Archangel, Micah, but as the investigation matures, they start to form a tight friendship. Bryce stated that she knew Hunt was her friend ever since he pulled out Jelly Jubilee. Their romantic relationship develops, and when Hunt was on his deathbed, Bryce whispered 'I Love You' to him before making the Drop. 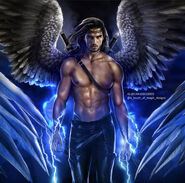