House of Earth and Blood (novel)

#1 New York Times bestselling author Sarah J. Maas launches her brand-new CRESCENT CITY series with House of Earth and Blood: the story of half-Fae and half-human Bryce Quinlan as she seeks revenge in a contemporary fantasy world of magic, danger, and searing romance.

Half-Fae, half-human Bryce Quinlan loves her life. By day, she works for an antiquities dealer, selling barely legal magical artifacts, and by night, she parties with her friends, savoring every pleasure Lunathion—otherwise known as Crescent City— has to offer. But it all comes crumbling down when a ruthless murder shakes the very foundations of the city—and Bryce’s world.

Two years later, her job has become a dead end, and she now seeks only blissful oblivion in the city’s most notorious nightclubs. But when the murderer attacks again, Bryce finds herself dragged into the investigation and paired with an infamous Fallen angel whose own brutal past haunts his every step.

Hunt Athalar, personal assassin for the Archangels, wants nothing to do with Bryce Quinlan, despite being ordered to protect her. She stands for everything he once rebelled against and seems more interested in partying than solving the murder, no matter how close to home it might hit. But Hunt soon realizes there’s far more to Bryce than meets the eye—and that he’s going to have to find a way to work with her if they want to solve this case.

As Bryce and Hunt race to untangle the mystery, they have no way of knowing the threads they tug ripple through the underbelly of the city, across warring continents, and down to the darkest levels of Hel, where things that have been sleeping for millennia are beginning to stir...

With unforgettable characters and page-turning suspense, this richly inventive new fantasy series by #1 New York Times bestselling author Sarah J. Maas delves into the heartache of loss, the price of freedom—and the power of love. [1]

Part I: The Hollow

The Hollow shows Bryce's life before the tragic accident and the events that occurred that day. It tells a story of the truest friendship held between Bryce and Danika, and the blossoming, slow-burn romance of Bryce and Connor. In Part I, you already have a strong love for Bryce, and the Pack of Devils so the deaths so early on in the book are heart-breaking.

This part shows the developing friendship between Hunt and Bryce, they start off as hostile partners and by the end of The Trench, they both feel a minor attraction toward each other. This part always has Sarah J Maas' favorite scene, Bryce in the shooting range. Hunt and Bryce start to piece things together and solve the mystery, or so they thought.

As Bryce and Hunt delve deeper into the crimes and finally come closer to the answer, they also become more aware of their attraction to each other, and grow more intimate; at one point almost having sex. But then, all those feelings dissolve as Bryce learns that Hunt was working with Viktoria and Justinian (33rd legion members and slaves to Micah), and they planned to use the Synth to overthrow Micah and end their slavery. Bryce was agonized and heartbroken and we were left on a cliffhanger on what punishment Hunt would be given.

In this part, we learn that Micah has sold Hunt to Sandriel, as punishment for the plotting of revenge. The Summit commences, with Hunt shackled with the gorsian stones, barely able to move. Micah leaves suddenly, and soon he arrives at Bryce's workplace. With Jesiba's installed cameras, Declan Emmet manages to livestream Micah's encounter with Bryce in front of everyone at the Summit. It is soon revealed that Micah killed Danika, who had inked the Horn onto Bryce's back and Micah was planning on using Bryce to open a portal to the unknown worlds. Lehabah sacrifices herself so Bryce could slaughter Micah, and Queen Hypaxia dissolves Hunt's slave tattoo, so he could also slaughter Sandriel. Then Lunathion erupts into chaos as a portal to Hel had been opened up, leaving demons to roam the city. Bryce does the only thing she knows how to do, save everyone even if it means her death. She makes the Drop, with the help of Danika's spirit and her Firstlight heals the world and closes all the portals.

The epilogue reveals that Jesiba had a relationship with Hunt's father, with Sarah eluding toward a romantic one. It also shows Jesiba Roga and Aidas, Prince of The Chasm discussing Bryce's power, and how she holds Theia's light.

To celebrate the release of House of Earth and Blood, Bloomsbury Publishing hosted a special promotion! Submit your pre-order receipt to receive an exclusive art print.

Attention: This offer was only available to the USA, Canada, UK, ROI, India, Australia, and New Zealand. 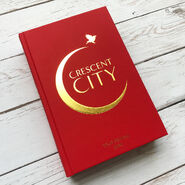 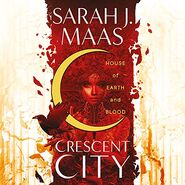 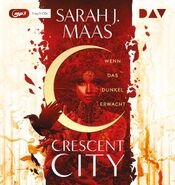 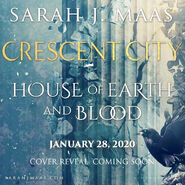 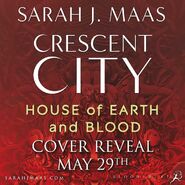 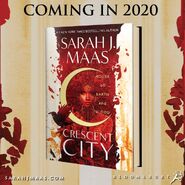 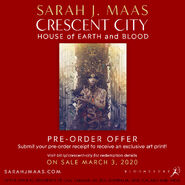 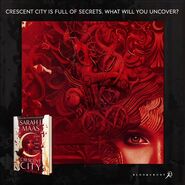 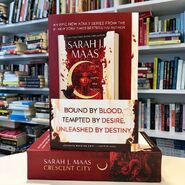 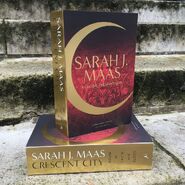