Crescent City is a planned trilogy of new adult fantasy books by Sarah J. Maas.[1] The series follows Bryce Quinlan, a half-human, half-Fae as she attempts to avenge her friends' murders and protect her vibrant city.

Set in a world where humans struggle to survive amid intricate hierarchies of demons, shifters, angels, and countless other magical creatures, House of Earth and Blood tells the story of half-human, half-Fae Bryce Quinlan. After the brutal slaying of her best friend, Bryce joins forces with a powerful warrior-angel to hunt down the killer, leading them toward a treacherous enemy that could destroy the fabric of their world. 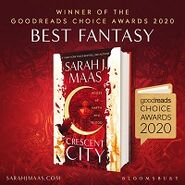