Connor Holstrom was Danika Fendyr's Second and part of The Pack of Devils.

When Connor was a teenager his parents died, leaving him and his younger brother Ithan alone. Connor raised Ithan on his own, supporting his brother's love of sunball but insisting he go to college before starting a sporting career. Connor and Ithan were very close, and his little brother idolized him.

At some point Connor met Danika Fendyr and they became friends, with her ultimately choosing him to be the Second in her Pack of Devils. Through Danika ,Connor met Bryce Quinlan, who was attending CCU with her, and Connor developed feelings for her but obeyed Danika's orders to not make any moves towards her, though they had a mutual interest in each other and he was not subtle in his disapproval of her various partners.

After Danika graduated and the Pack of Devils began serving in the Auxiliary, Connor became a respected enforcer of Lunathion's laws, performing many violent and unsavory acts to keep the city safe but never complaining about his role as Danika's Second or the torture he sometimes had to inflict in the name of keeping the peace.

Five years after meeting Bryce, Connor—with permission from Danika—finally asked her out. Both of them spent the next few hours looking forward to their date but Connor was killed in Bryce's apartment before they had a chance to pursue a relationship.

Micah then hatched a plan to get revenge on Danika and try and find the Horn. He waited until Philip Briggs, a human rebel, was released from prison, so he could frame him for the packs deaths. He went to Danika and Bryce's Apartment where the Pack of Devils and Connor were at the time and used his Magic to disable them. He then injected Danika with Synth, which caused Danika to rip her pack apart before turning on herself. Micah then summoned a Kristallos demon to cover his traces.

Philip Briggs was then accused of their murders due to him being imprisoned by Danika previously, leading the authorities to believe he did it for revenge. However, Micah near the end of House of Earth and Blood admitted to Bryce that he was the one to kill Connor and the pack.

Connor had a strong, loyal character. He was content with his position in Danika's Pack and never complained about the things he had to do to keep Lunathion safe.

Connor was a good-looking male, with well-defined muscles and golden skin. As a member of the Pack of Devils he had the group's insignia of a horned wolf tattooed on the side of his neck. In his wolf form, like all shifters, he is three times bigger than his regular counterpart, however, Bryce described him as being much larger than the average shifter.

Connor and Bryce met at university, through Danika. Connor had feelings for Bryce for years, but Danika told him he wasn’t allowed to make a move in until Bryce was ready. After five years, Connor let her know how serious he was for her. Bryce broke up with her boyfriend, Reid Redner, and decided to give him a chance. However, he was murdered before they got the chance to go on the pizza date they had planned. 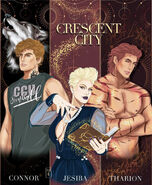