Bryce Adelaide Quinlan is a half-fae, half-human who works for an antiquities dealer, selling barely legal magical artifacts for a living. She is also the bastard daughter of the Autumn King. Two years after the brutal slaying of her best friend, Bryce joins forces with a powerful fallen angel to hunt down the killer.

Bryce was born in the year 15010 V.E to Ember Quinlan, a 19-year-old human woman who had been seduced by the Autumn King. Bryce was raised by Ember and her stepfather Randall Silago, who taught her self-defense and how to handle weapons, especially guns. Bryce's mother was very protective of her.

Bryce wasn’t treated very well by other kids when she was young, they treated her like she was a freak. However, when she was little The Starlight Fancy horses were the number one toy on every girl’s Winter Solstice wish list when she was five. And they were not all made equal, Jelly Jubilee was very rare. Ember left Nidaros for the first time in years to buy Jelly Jubilee from one of the big towns two hours away. Jelly Jubilee was the ultimate Starlight Fancy conquest. Not just a unicorn, not just a pegasus—but both. Bryce showed all the other kids at school and was instantly accepted.

When Bryce was thirteen Ember had a sudden change of heart about her meeting her father and got in contact with him. Documents showed up a few weeks later granting Bryce civitas status in exchange for her declaring allegiance to the House of Sky and Breath. Bryce was hesitant, but Ember encouraged her to do it.

Bryce soon visited her father for the first time at his villa in Five Roses. This was also the first time she met her half-brother Ruhn Danaan, and they quickly became close. Her visit to her father, however, was less successful and her hopes of having a relationship with him were dashed by his vindictive personality and behavior towards her. The Autumn King refused to acknowledge her until her traditional visit to the Oracle, which was an unmitigated disaster that left her in tears and ended with her father kicking her out of his villa to make her own way home.

Having just returned from a disastrous visit to the Oracle, Bryce was crying on a park bench outside the temple when a cat found her. which turned out to be Aidas, a prince of Hel, having seemingly heard the screaming from inside the temple, was intrigued by Bryce and appeared next to her.

Aidas told the young girl to stop crying, saying it would only satisfy those who wronged her. He then sat with her until she stopped crying and felt brave enough to return to her father, though he disappeared before she could thank him.

The Autumn King later offered Bryce a monstrous amount of gold marks in exchange for Bryce to keep her eternal silence about him, being her father. Bryce however, decided to develop some semblance of morals and rejected the money, but still kept quiet about her parentage.

Despite the falling out with the Autumn King Bryce maintained a relationship with Ruhn until she was sixteen, at which point they had a big argument after Ruhn insulted her. Bryce stopped speaking to Ruhn afterward, ignoring his various attempts to apologize.

When she was older Bryce attended Crescent City University, where she met Danika Fendyr. The two quickly became close friends. They remained friends throughout college and beyond.

During their senior year Danika uncovered an illegal animal smuggling ring run by asp shifters; plagued by guilt at the thought of the animals in cages Danika and Bryce snuck into their hideout to free the animals and were caught, resulting in them being chased and injured by the shifters. Cornered and about to be killed, Bryce told Danika to close her eyes and killed some of the shifters, while the others were killed by police.

After college Bryce and Danika moved in together; Bryce got a job working at Griffin Antiquities for the feared Jesiba Roga while Danika went on to become Alpha of the Pack of Devils.

Bryce Quinlan is a 23-year-old half fae half human who works as an assistant at Griffin Antiquities, and lives in an apartment together with her best friend Danika, granddaughter to the Werewolf Prime and alpha to the Pack of Devils. They recently got the news that Phillip Briggs, who was caught by Danika’s pack planning to blow up a nightclub to spread the war between humans and vanir, has been released from jail. Danika is going to meet up with Micah, the Governer of Crescent City and wider Valbara to complain about Briggs release. Meanwhile, Jesiba has tasked Bryce with locating Luna's Horn, an ancient Fae relic that was stolen during a recent power outage from its temple.

Because of Briggs's release, Danika and the pack spent the evening at the flat (Bryce and Danika's apartment) and Bryce leaves for a date with Reid Redner. On her way, Connor, a member of the pack, interrupts her and begs her to let him take her on a date, however, Bryce refuses and makes her way to the date. Because Reid is late, and barely pays attention, always being on his phone, Bryce dumps him and texts Connor that she'd go out with him. After leaving the place where she was with Reid, Bryce meets Fury and Juniper so that they can go clubbing, taking drugs, and drinking heavily as she texts Danika.

However, once she reaches back to her flat, Bryce stumbles home to find her door smashed and Danika and the pack dead, cut into pieces. Seeing a demon escaping, she chases after it to understand what has happened and finds out that it was feasting on an angel. Bryce hits the demon, however, it gouges her leg and runs away. Bryce later stays to keep the angel alive. Bryce is later found in her apartment and is taken in a holding cell, watched by over two angels, Isaiah and Hunt. Both of them took part in a rebellion, that later resulted in them being proclaimed fallen. Ruhn, Bryce's distant cousin calls and demands that they let Bryce go and Isaiah has no choice but to release her.

Bryce is a very headstrong, sarcastic girl. She does a lot of things with different intentions, and can secretly do a lot while putting on the facade of a "stupid party girl". She doesn't care about rules and is willing to break the law to get things done. However, she is hated by many people, leading to a hidden depressive side. She is also deadlier than she lets on, being raised by a legendary sharpshooter.

Bryce has long wine-red hair with freckled skin, full lips, high cheekbones, and slightly arched ears, thanks to her Fae heritage. Her eyes are amber-colored and her skin is golden-dusted. She has a curvy form and is said to be busty. She is also described as attractive. She has a tattoo down on her back, written in an unknown alphabet, saying Through love, all is possible, which she got together with Danika. She also has a white tattoo in the shape of an eight-pointed star between her breasts, which she got when she used her Starborn gifts to close the gates.

While initially thought to have negligible power levels, Bryce is later revealed to have more power than her father, the King of the Valbaran Fae. She is also the strongest Starborn anyone has seen in centuries.

Connor and Bryce met at university, through Danika. They had a crush on each other for years, but Danika told Conner he wasn’t allowed to make a move until Bryce was ready. When Bryce broke up with her ex-boyfriend, Reid Redner, who she dumped shortly before the murders started, she decided to give Connor a chance and agreed to go on a date with him. However, he was murdered before they got the chance to date.

During her investigation into Danika's death on behalf of Micah Domitus, Bryce grew close and began a relationship with Orion "Hunt" Athalar. They have a classic enemies-to-lovers relationship, at first, they only tolerated each other due to direct orders for the Archangel, Micah. As the investigation matures, they start to form a tight friendship. Bryce stated that she knew Hunt was her friend ever since he pulled out Jelly Jubilee. Their romantic relationship develops, and when Hunt was thought to have been dying, Bryce whispered 'I Love You' to him before making the Drop.

Though Bryce never hooked up with Tristan, she had a crush on him when she was younger. When she used to visit Ruhn as a teenager, she was barely able to function in both Flynn’s and Declan’s presence. For a while, Bryce had a fanatic’s conviction that Flynn would be her husband one day. She wrote Lady Bryce Flynn on all her school notebooks for two years straight. Years later, when she was already in college, she ran into Flynn again—this time, Danika went home with him because Bryce hadn’t wanted to mess up anything between him and Ruhn. 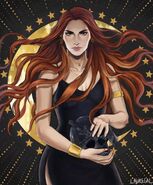 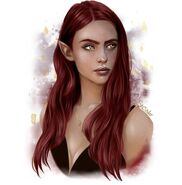 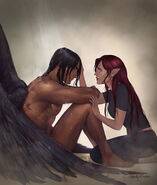 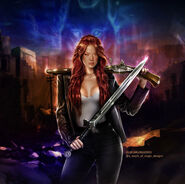 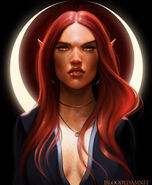