Crescent City Wiki
Register
Don't have an account?
Sign In
Advertisement
in: Male characters, House of Earth and Blood characters, Demons,
and 2 more

Prince of the Chasm

Aidas, known as the Prince of the Chasm, is a powerful demon and one of the seven Princes of Hel. He occupies the fifth level of Hel.

In the year 15023 V.E. Aidas made an illicit trip to Midgard through a crack in the Rift. During his short visit, he came across a young Bryce Quinlan in his cat form. Bryce, then thirteen years old and having just returned from a disastrous visit to the Oracle, was crying on a park bench outside the temple when the Prince found her. Aidas, having seemingly heard the screaming from inside the temple, was intrigued by Bryce and appeared next to her.

Aidas told the young girl to stop crying, saying it would only satisfy those who wronged her. He then sat with her until she stopped crying and felt brave enough to return to her father, though he disappeared before she could thank him.

Twelve years after their encounter outside the temple, Bryce used obsidian salt to illegally summon Aidas in her apartment in the hopes that he would have some information about Danika's death and who was using the kristallos demon to commit murders in Lunathion.

Aidas remembered Bryce from their first meeting but was unable to provide much assistance, beyond advising her and Hunt to run tests on the first murders again. Noticing that his power was slowly freezing the room-and Bryce-Aidas left, telling Bryce to make the Drop and find him afterward.

Later, Aidas and Jesiba are shown discussing Bryce's powers and how she holds Theia's light.

Aidas is implied to be able to change his appearance. When he first appears to Bryce following her traumatic encounter with the Oracle he takes the shape of a white cat with unnaturally blue eyes; due to being bound by the laws that trap demons in animal form if they enter Midgard through cracks in the Rift he was stuck in this form during their meeting, but was able to talk.

When Bryce summons him twelve years later, Aidas appears as a beautiful young man with blond hair that falls to his shoulders in soft waves, a fine boned face, and eyes like blue opals. His mouth is described as full and sensuous, and his teeth as unnaturally white. In this form, he wears a closely tailored black suit.

Despite a general, unnamed dark power Aidas also displays instances of the following: 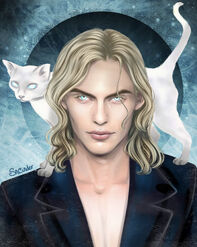 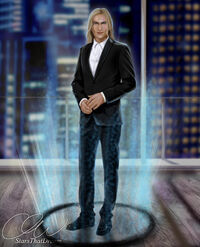 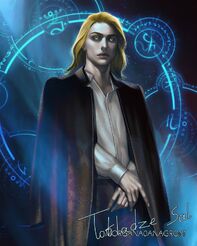